One Man, one bicycle, 40 countries, 4 continents – an environmental pilgrimage to highlight the bike as a positive tool in the battle against climate change. Watch the trailer created for an upcoming documentary on South African solo adventurer Kayden Kleinhans’ epic bicycle journey around the world all in the name of carbon reduction and environmental awareness.

In association with Bakedginger Productions 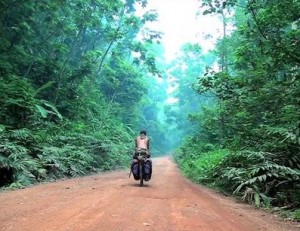 Globalwheeling.org is the virtual home of South African Solo Adventurer, Kayden Kleinhans, Environmental Activist and Founder of the Global Wheeling initiative, a South African registered NGO and platform for environmental change. Kayden has to date traversed over 31 000 kilometres on four continents crossing some of the most volatile regions on the planet by bicycle, all in the name of carbon reduction and environmental awareness. A protest against climate change, most recently navigating Europe and Africa in an attempt to plant one tree for every carbon free kilometre cycled. A project designed to assist in offsetting the colossal carbon footprint left by the South African Football World Cup 2010. Kayden is currently gearing up for phase two of the Global Wheeling initiative that will tackle the Americas, continents five and six in his adventure repertoire, solo and unsupported as he continues to forge forward on a quest to highlight the possibility of change towards a lower carbon dominated lifestyle whilst advocating the bicycle as a positive tool in the battle against climate change.