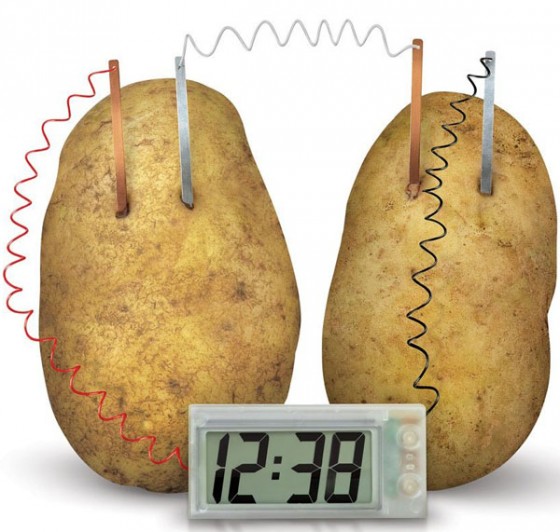 Yesterday I discovered natures most versatile energy source – potatoes. With a few tweaks your everyday carbo load can be turned into a super spud that can power an alarm clock!!

A potato battery is an electrochemical battery in which chemical energy is converted to electric energy by a spontaneous electron transfer.

“In the case of the potato, the zinc in the nail reacts with the copper wire. The potato acts as a sort of buffer between the zinc ions and the copper ions. The zinc and copper ions would still react if they touched within the potato but they would only generate heat. Since the potato keeps them apart, the electron transfer has to take place over the copper wires of the circuit, which channels the energy into the clock. Presto! You have potato power.” Read more: Potato Battery | Clock | Science Fair Project | Energy | Chemical | Electrochemical

MAKE YOUR OWN HERE

OR FIND IT ON AMAZON