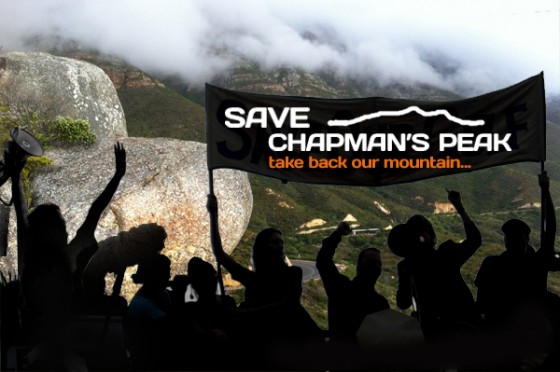 Enough is enough. Corporate and government agendas are trying to over-rule public protest about the ugly, unnecessary office building planned for Chapman’s Peak, ignoring marches, petitions, hunger-strikers and very viable suggestions for alternatives. Murray and Roberts, with the agreement of the DA government, plan to go ahead with construction on Monday morning.

This is a call to everyone who has enjoyed the privilege of Chapman’s Peak. This Sunday let’s take back our mountain and join in solidarity to make a powerful public statement – that the toll company MUST employ a more environmentally friendly solution. Read on for the official invite.

It was confirmed today that corporate and government agendas are over-ruling public protest about the ugly, unnecessary office building planned for Chapman’s Peak, ignoring marches, petitions, hunger-strikers and very viable suggestions for alternatives,. Murray and Roberts, with the agreement of the DA government, state that they are going ahead with construction on Monday morning.

This decision sets a precedent for the unlawful use of Table Mountain National Park land, a World Heritage Site, for the vested interests of the very few, at the people’s expense. Chapman’s Peak is one of the most beautiful scenic drives in Africa, if not the world, and apart from the road, is still, to a large degree in its pristine state – for the people and our children to enjoy the magnificence of it’s spectacular Natural Beauty, untainted by concrete.

This is a call to everyone who has enjoyed the privilege of Chapman’s Peak, to join in solidarity to make a powerful public statement – that the toll company MUST employ a more environmentally friendly solution – instead of marring the landscape by bulldozing and concretising, scarring it forever with a completely over-the-top, unnecessary toll plaza and fancy office block for themselves.

All attempts at persuading Murray and Roberts, Entilini, the roads department and even Helen Zille, to consider gentler more efficient alternatives have been utterly sideswept in favour of their own political and corporate interests and their obvious hidden agenda (why else would they ignore public demands?)

We can now only hope to stop this wastage, injustice, environmental ruin and precedent if we show up BEFORE Monday – otherwise it will be too late and we will then have corporate offices on Table Mountain National Park, a huge asset on Murray and Roberts books, but a blot on everyone else’s landscape, half paid for with tax-payers money!!!

There are many people who have been selflessly working behind the scenes to get this development stopped. All ask you, who treasure this mountain, who believe in true democracy, to stand up for justice and transparency and join us in voicing loudly but peacefully, public disapproval of this corporate/government collusion for a monstrosity when better alternatives are possible, and the funding needed for more pressing needs.

If we give up now – this defeat will become the norm. If we stand up en masse, with the media behind us, they will HAVE to take notice.

IMPORTANT NOTE: We do not want to give the ‘authorities’ any ammunition for banning or disregarding the meaning of this gathering so we ask that absolute respect for property and nature been upheld. No graffiti, or harm to the building site. This is NOT A FORMAL PROTEST MARCH. We have no permit – we are just asking EVERYONE who can, to come and have a picnic on Chappies on Sunday at sunset. Exercising our right to enjoy our National Park.

PLEASE send this invitation out to all that you know.

COME ON UP THE MOUNTAIN! – It’ll be fun, inspiring and empowering. Tell your friends, bring the whole family… the weather is going to be PERFECT !
– lets watch the sun go down on dodgy deals and insist on a new way forward,  before the trucks of concrete arrive on Monday morning. What else can we do?

On behalf of all those who have offered their time, their effort, their hard work, and even their lives, to find a better solution… and for the people’s voice to be heard and respected.